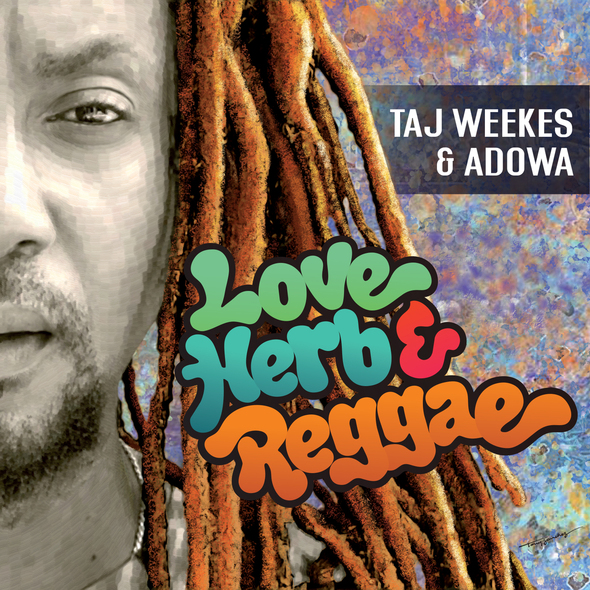 Taj Weekes & Adowa are back with another Roots Rock classic! Entitled Love, Herb & Reggae – a positive spin on Sex, Drugs & Rock’n’Roll-Taj& his group, Adowa, continue on their mystic journey to enliven & enlighten us in these troubled times. Staying true to the very foundation of Roots Reggae music, Taj Weekes and Adowa flavor their infectious one drop & rocker beats with wicked choral harmonies & Taj’s compelling vocals that draw the meaning & emotion out of each word. We each form a link in the chain of our shared existence and at once feel the plight of the downtrodden everywhere through the unifying spell of one of the best Roots reggae bands on the scene right now. Each song on this album is a shining gem which much to learn from and vibe to so here is my breakdown:
1-Let Your Voice – be as loud as your silence..”IN CONFIRMATION OR DISSENT ,YOUR VIEW AND THOUGHT DO REPRESENT CONFIRMATION OR DISSENT”..Especially in these disturbing times, we all have to take a stand. We either stay silent and allow things to continue or find the courage to take a stand. As he says, “Marshall your convictions/Be clear in your thought

2-Life In The Red….Let’s be clear: most of us are debt slaves.The entire shitstem is designed to trap us in debt before we even get out into the “real world” and keep us in debt until we die or as Taj would say, “LIFE IN THE RED/TRADED MY DAY FOR CONVENIENCE OF LIFE/SLAVE I’VE BECOME, SLAVE I AM/I LABOR TO PAY TO HAVE TO OWN/I LABOR TO PAY THE MERCHANT/….I’M CAUGHT HERE FIGHTING FIRE WITH A FEATHER…”

3-Full Sight….Sometimes men find themselves dealing with compromising situations where our convictions are tested, especially by the allure of opposite sex. This song illustrates that “I love my woman, but I gotta get this” vibe.At the end of the day, a man has to face himself and the consequences of foresaking his commitments and witness the unraveling of a loved one “out of reach in full sight”….This song cries with desperation from the opening “DESPERATION’S DRIVEN ME WAY BEYOND ETIQUETTE” to its bitter, remorseful end, “YES SHE STOOD THERE LIKE THE MOON, OUT OF REACH IN FULL SIGHT”….

4– Giant Beast – This is about the decline and ruins of Empire. The American Empire – solidified after WWII – is in the midst of its decline whether one wants to believe it or not. Call it imperial overstretch, Taj sees the end in sight – “ONE DAY GIANT BEAST/WILL BE STANDING BROKEN/ALL SPLINTERED IN IT’S FLESH, ENVELOPED IN DISTRESS/ONE DAY GIANT BEAST WILL BE STANDING BROKEN/HER ALTERS MADE OF BRASS/HER GLORY DAZE LONG PAST”.

5-Here I Stand – Love can sometimes be very complicated. We sometimes fill the vast chasm of our misunderstanding with all sorts of distorted ideas that feed into our prejudices. This is a powerful statement coming from a reggae artist as the genre is still steeped in a dry “Adam & Eve not Adam & Steve” narrative. This cut is what Macklemore & Ryan Lewis’s marriage equality anthem “Same Love” was to rap. That Grammy winning song opened up a lot of people to the acceptance of people loving one another beyond the socially-accepted, man<->woman paradigm. It remains to be seen if Reggae radio/internet DJs will promote Taj’s bold anti-homophobic stance. They should take heed to his warning-“YOU’VE GOT A FRAGILE PICTURE FRAME SITTING ON A BROKEN EASEL/ UP COMES THE WINDS OF CHANGE/ DOWN GOES THE EASEL”.

6-Love Herb & Reggae – I like the way this song starts out with the Nyabinghi drums somewhat reminiscent of Bob Marley’s “Rastaman Chant”. Taj takes command of this musical meditation with aplomb advocating music for the soul & LOVE as the only law to rule the world. Love here is unbounded in Taj’s rendering. At center stage is “philo sophia I & I with backdrop of Selassie I”. Love as beyond flesh & deeply mystical & revolutionary is what I vibe when this rhythm takes hold. Masterful.

7-Bullet For a Gun – Great anti-violence song. Taj’s voice embodies the grief that so many families go through after losing a loved one to violence. “HAPPY Was OUR RISING NOW YOU TOOK AWAY OUR SUN AND DARKENED THE HORIZON” . He wonders, like so many of us do, “CAN WE GIVE LOVE TRY? THAT’s ALL THAT’s LET TO TRY” With Death casting its thick shadow all over the place & our leaders’ short-sighted approaches to counter it, why not give love a try?

8-Mediocrity – Expect the best in yourself and forfeit the comfort of compromise! That seems to be the main thrust of this rhythmic declaration. Taj does Henry David Thoreau proud for in Thoreau’s indelible words,”Most men lead lives of quiet desperation and go to the grave with the song still in them”. Taj aint ready for any grave as he defiantly states, ” I WON’T MAKE PEACE WITH MEDIOCRITY/CAN YOU HEAR ME, CAN YOU HEAR ME SCREAM/CAN YOU HEAR ME, I’M SWIMMING UPSTREAM ‘CAUSE I WON’T ROLL OVER AND DIE”. Heed the words & wake up and live!

9-Rebels To The Street – It has become obvious to many, especially in light of the 2008 financial meltdown, that the system as a whole has failed us and answers only to a few. It is unresponsive to our collective cries and leaves us with only one avenue in pursuit of justice – the streets! It’s the only way. Taj seems to channel the great Frederick Douglas on this piece, as it was Douglas who once said, “Power concedes nothing without a demand. If there is no struggle there is no progress. Those who profess to favor freedom and yet deprecate agitation are men who want crops without plowing up the ground; they want rain without thunder and lightning. They want the ocean without the awful roar of its many waters”. Rebels! To the streets!!

10-The Laws – Marijuana laws, like the whole of drug law policy in the US is a sham and the world knows it. It’s not to say that there should not be laws governing the use, distribution & sale of any type of drug, but it has to make sense & not built on fear and ignorance as the results of this have been disastrous, especially to communities of color who do less drugs of any kind but end up going to prison for long stretches than any other group. Taj is finely attuned to the madness & observes, “SILLY HYPOCRITES PRETEND/ YES THE HYPOCRITES PRETEND/ THAT ITS YOU AND ME NOT THEM”. Of the many medicinal properties/uses of herb, he chimes, “ALL THEY SEE IS GETTING HIGH/WHERE HEALTH AND HEALING SHOULD APPLY”. I highly recommend this (http://www.drcarlhart.com/ted-talk-everything-you-think-you-know-about-drugs-is-wrong/) video. After looking at it, listen to this cut again and appreciate the intelligence of one of the best Roots Reggae stars on the scene…

11-Was It You – One of the lighter pieces on this album which serves as a soothing reprieve from the contemplative lyricism that make up most of this album. The beat bounces along infectiously intersected by sweet background vocals that reminded me of the I-Threes. Taj’s poetic sensibilities shine here. At some points he sounds like Pablo Neruda as in the line “YES SHE COAXES A SMILE, I’M AS JOYFUL AS A CHILD/CAUSE YOU BROUGHT ME A RAINBOW/AND PAINTED MY SKY”. You gotta love this!!

12- Rebel – I can hear Marley’s “Redemption Song” & it is equally as powerful as Marley’s classic. With just a guitar & light piano chords towards the end, the raw honesty & rebelliousness in Taj’s voice invokes the rebel in all of us to come out and resist the Darkness that shrouds & silences. Marley was inspired by Marcus Garvey on “Redemption Song” by quoting the great orator with ““Emancipate yourselves from mental slavery/ None but ourselves can free our mind”. Taj borrows from Ridley Scott’s Robin Hood when he says in the opening credits of this classic work, “In times of tyranny and injustice, when law oppresses the people, the outlaw takes his place in history”. In light of the criminal inequalities that abound, this song is right on time!!History shows that whenever liberty is threatened, a countermeasure will emerge. From the very beginning of his musical career, from his debut Hope & Doubt to his Grammy-nominated Deidem to the critically-acclaimed Waterlogged Soul Kitchen, Taj rebelled against the shitstem in his own unique way gaining fans from all corners of the world.

Awaken to the Rebel’s cry….